When it comes to choosing an outdoor activity to do when you’re on Vancouver Island, there is no wrong answer.

With endless stretches of greenery, jewel-like expanses of ocean, and a temperate climate nearly year-round, just being outside taking in the sights of the island is an activity unto itself. The area is canopied by a variety of trees — Western Red Cedar, Doulas Fir, Sitka Spruce — sometimes so colossal they don’t seem real. The Pacific Ocean circles the island, providing countless opportunities to watch the waves, soak up the salty ocean air, and if you’re lucky, spot an Orca or humpback whale.

But with the many choices of parks, paths, and open sweeps of road, one of the most popular island pastimes is cycling. Whether it’s coasting past the ocean on a cruiser bike, or experiencing an adrenaline rush while kicking up some dirt on a mountain bike, Vancouver Island is an ideal place to hop on a bike and take in everything the area has to offer. Check out these popular routes for some ideas to plan your next biking adventure.

B.C.’s capital city, Victoria, is also the cycling capital of Canada. With an increasing number of Victoria residents choosing cycling as their commuting method of choice, the city is well-equipped with cyclist lanes, bike lock-up areas, and cycling routes for everyone from beginners to the most hardcore of cyclists. One of the most popular cycling routes in the city is the Seaside Touring Route — a leisurely and scenic route for beginners, but still expert-approved. The route is a 39-km loop, but you can choose to hop on or hop off at any point. Since the city provides many areas to park your bike, you can also stop to sight-see along the way. Begin your ride in North America’s oldest residential neighbourhood, James Bay. Here, you can stop at a variety of local coffee shops, and ride or walk along the Ogden Point Breakwater. Next, cruise into Fairfield and Gonzalez where there is ample opportunity to check out the beaches or stop for an ice cream cone at Beacon Hill Park near Dallas Road. The route continues northeast, through neighbourhoods such as the Oak Bay and Cadboro Bay, with many options for shopping or lunch. If you want to continue on the loop, head north to connect to the Galloping Goose Trail to get back downtown.

Victoria’s Galloping Goose Trail is an old 1920s railway converted into a 55-km path, winding its way through most of the city. The trail will take you from the city centre all the way to Leechtown, a ghost town north of Sooke. The Goose is a popular spot for cycling, running, walking — and even horseback riding on some parts of the trail. Since the trail connects to most parts of the city, you can stop and sightsee at your leisure if a 55-km ride is too daunting to do in one go. The trail showcases a variety of landscapes: rocky paths lined with scented Douglas Firs, serene waterways dotted with ducks and geese, and rural farmland with grazing animals, providing plenty of opportunities to snap some breathtaking photos. After you fuel up for breakfast (top picks: John’s Place and Jam Café), begin your ride on the Johnson Street Bridge and continue along the Selkirk Trestle to the Gorge Waterway and Portage Inlet. The trail continues through much of the West Saanich neighbourhoods before continuing on to the western communities of Langford and Metchosin. In the summer months, stopping here to take a dip in Thetis Lake is an ideal way to cool off. The trail then heads towards Sooke, where it ends at the old gold mining community of Leechtown. After the ride, you will most likely want to spend the evening at one of the many campgrounds or B&Bs in the area before heading to wherever your bicycle takes you next.

The dense thickets of well-kept greenery, impossibly tall trees, and a VIP view of the mountains make Cowichan Valley the perfect place to spend the day brushing up on your mountain biking skills. Situated approximately 95 km north of Victoria, Cowichan Valley is a prime location for cycling with its more than 150 trails spanning across the area. Cowichan Valley is particularly well known for its plentiful mountain biking trails on the five mountains in the area — Maple Mountain, Tzouhalem, Prevost, Sicker, and Brenton. One of the most well-known trails in the area is the 122-km Cowichan Valley Trail, perfect for all skill levels. The trail spans from Shawnigan Lake to Lake Cowichan and then to Duncan, providing plenty of opportunities to take a rest and explore the other towns nearby. More advanced riders can put their skill to the test on Maple Mountain, a black-diamond trail. The challenging 18-km loop on Maple Mountain was created by mountain bike enthusiasts who, in partnership with the municipality, wanted a mountain biking destination that would attract riders from all over the country. Since the area is now known as the “go-to” place for mountain biking on the island, these trailblazers were definitely successful.

Cumberland, a former coal mining town, is a municipality of Comox Valley with a lot charm and plenty of prospects for outdoor activities. The peaceful village vibe of Cumberland is juxtaposed by its inhabitants’ love of the thrilling, fast-paced sport of mountain biking. Since the 1980s, mountain biking has become increasingly popular in the area because of the abundance of forested areas that make for perfectly rugged trails and heart-stopping descents. Cumberland’s trail network can be accessed near Comox Lake and veers into several trail options for biking depending on the rider’s skill level. Each of the area's trails bears quirky names, echoing the eclectic, laid-back vibe of the village itself. From the singletrack trail, Space Nugget, to the exhilaratingly technical Queso Grande, riders of all levels can fine tune skills, or challenge themselves with more difficult trails. End the day by relaxing by Comox Lake, or exploring the village’s downtown strip.

Experience a mountain biking adventure like no other. Situated on the eastern edge of Vancouver Island, Mount Washington is well-known for having some of the most spectacular views on the island. Although the area is primarily recognized for attracting ski bunnies from all over the world, Mount Washington is also popular among the mountain biking community for its numerous biking trails accessible by ski-lift. The resort reopened its Bike Park last July after closing in 2013, and mountain biking enthusiasts could not be more excited. With trails available for riders of all levels of experience, Mount Washington offers the opportunity for everyone to get into the sport of mountain biking. Beginners can explore mountain biking techniques on the Greenline Trail, while more advanced riders may want to jump right on to Finger Trail. The resort also offers many black-diamond and double black-diamond trails for the most daring of mountain bikers. With names like Monster Mile, Back in Black, Helter Skelter, and Time Warp, these trails are meant to challenge even the most expert of riders. 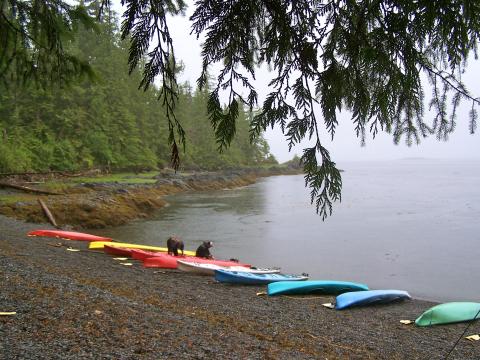 "This," said Jessie the guide "is your holy crap strap. If you go over, pull it!" That all-important... 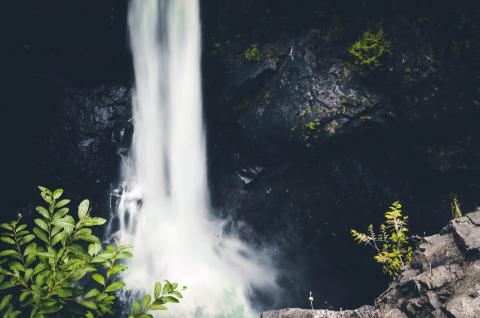 There's something magical about waterfalls. From hearing roaring water from a distance to up close... 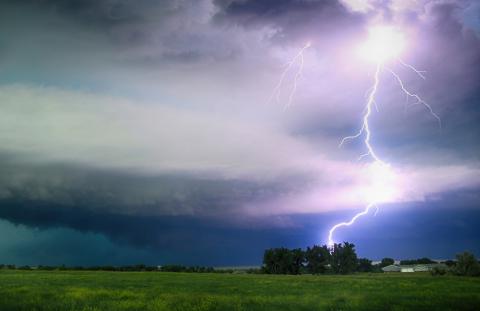 I am a professional storm chaser.

Yes, you read that correctly. 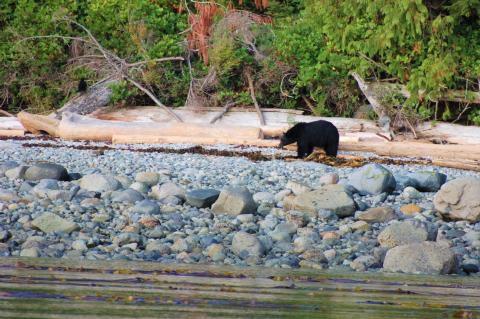 With fishing lines dipping into the glassy ocean, we sat and waited. Boredom brought the lines up... 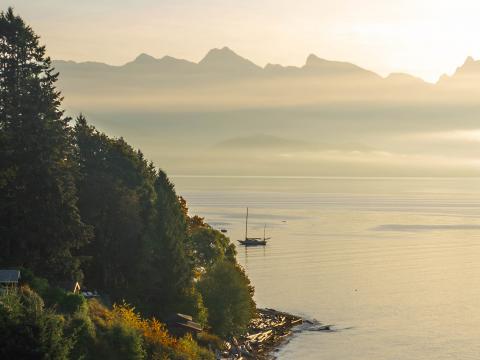 Moss won’t gather and roots wont grow under the feet of Nancy Shields. Just following her on... 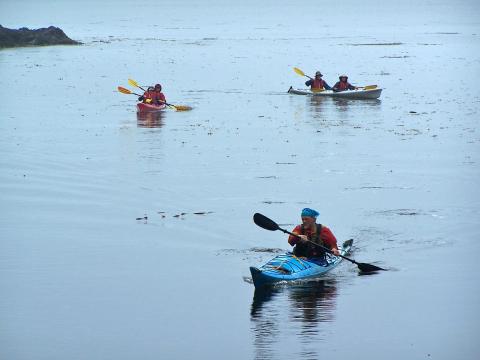 Growing up on the St. Lawrence River, gave Liz Fleming the opportunity to dip the paddle into the... 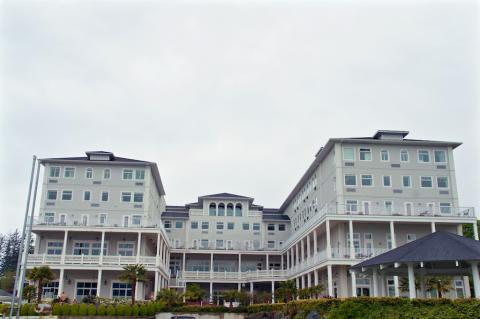 “It feels like candy in my pocket,” Deanna Brett said with childlike enthusiasm as she tucked away... 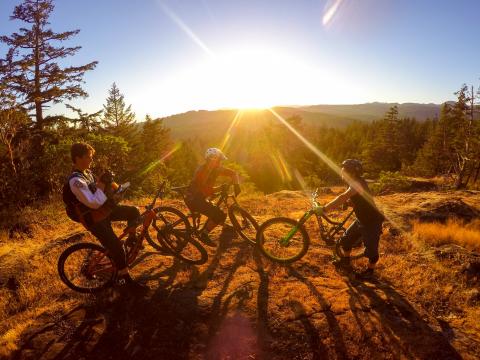 Visiting Sooke felt like being a tourist in my own town. It’s only 45 minutes away from where I grew... 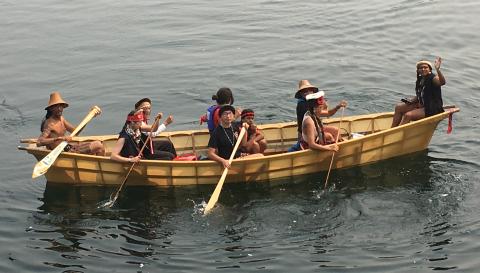 Reconciliation with the Indigenous People of Canada is an important conversation happening today in... 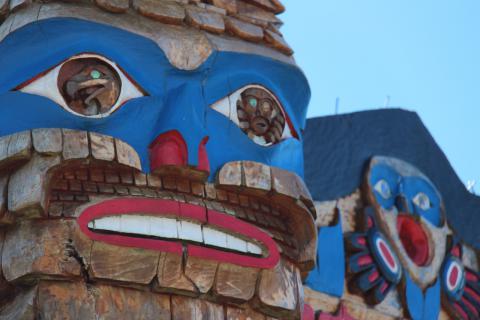 The project’s premise was simple: one tree equals one sea-worthy canoe built by many hands, some...