Explore Métis heritage by the river

Explore Métis heritage by the river

Métis Crossing invites visitors to Meet the Métis with storytelling, games and crafts

By Jeremy Derksen for #TakeItToTheLake

Fiddle song dances play lightly over the patio at Métis Crossing as Sameer Ahmed and his wife Salma do their best to match their steps to the beat. Soha, their daughter, joins in too. Brianna Lizotte, the fiddle player, is teaching them a Métis jig, with the basic 3-and-1 step and a couple of changes.

The pace picks up and the three of them keep up, but they’re moving quickly and by the end they are all smiling and huffing to catch their breath. I’ve heard from other Métis dancers that you can’t jig without smiling. It seems to hold true, although the first expression people often adopt is one of intense concentration, giving way to smiles.

This is the last stop on the family’s Meet the Métis tour, and while there have been activities throughout, this is definitely a highlight for the three.

#MetisCrossing; Meet at the River to be Transformed 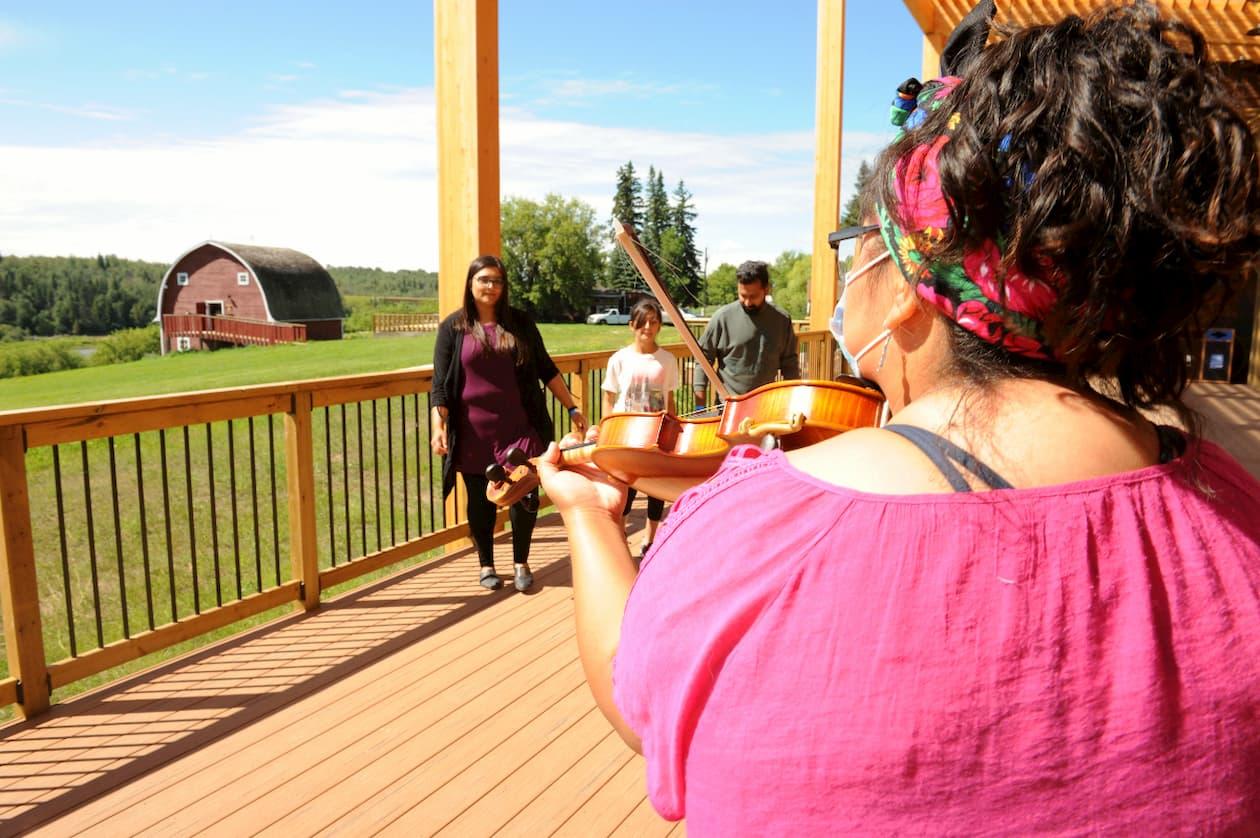 The Ahmed family jigs while Brianna Lizotte plays on.

The Ahmed’s younger two boys, Saifaan and Rehan, were more excited about the fishing game (“10 more minutes!”) and sash braiding. But all have found something to engage in, which is good for a family of five with children ranging in age from four to 12. With a mix of history, storytelling, crafting and games, the experience engages all ages.

The tour begins with an easy stroll through the grounds to a hunting camp set by the river. There, the first interpreter who meets them explains the social arrangements and protocol of the camp.

“We are traditionally a collective society,” she explains. “If you need something, you ask somebody. If they have it, they will share it with you. So if you need some food, you just ask. Stealing was not tolerated.”

Men who joined the hunt had to be able to ride a horse while loading and shooting a rifle. Women had roles in the camp as providers and cooks.

Down from the buffalo hunting camp, they meet another interpreter at a fishing camp, and a third at a homestead. At each site, interpreters in period dress tell a little about the lifestyle and culture of the time, followed by a demonstration or activity. 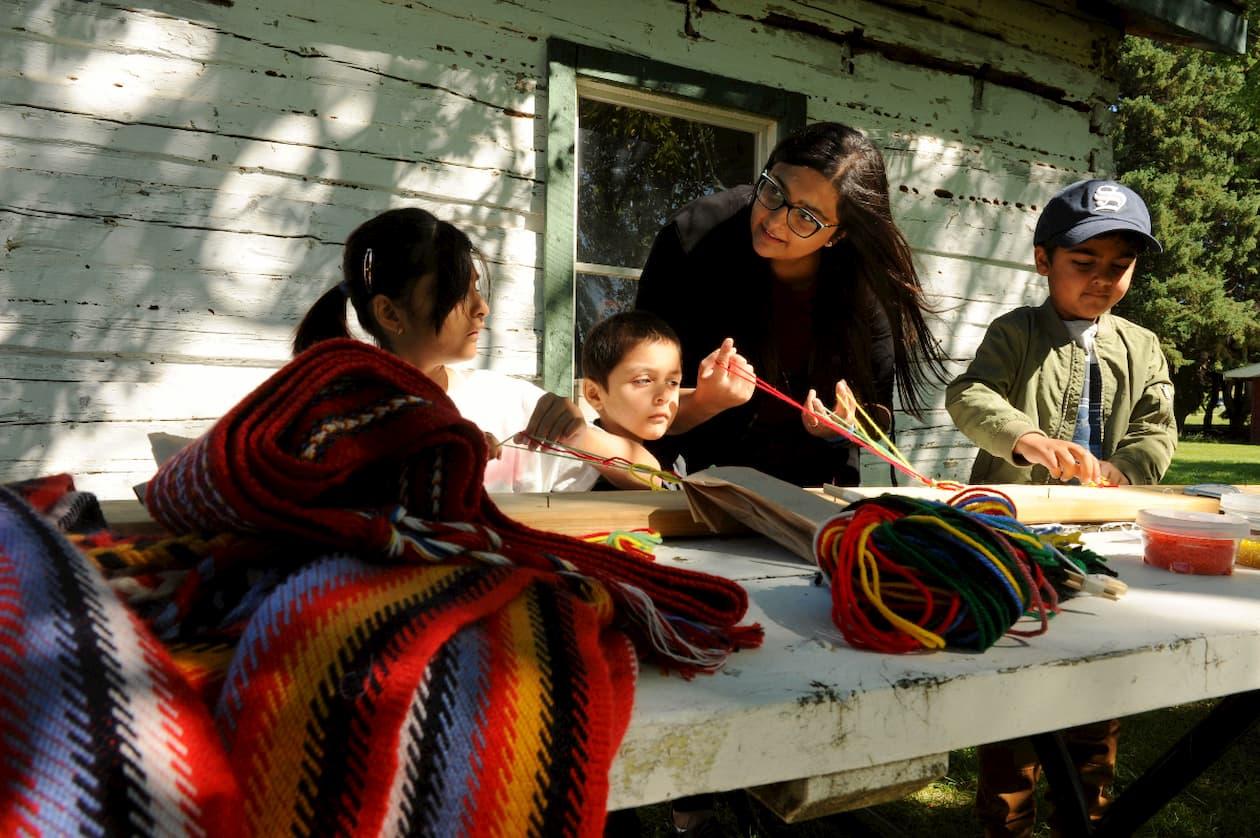 Braiding a small bracelet in the style and technique of the Métis sash.

While the family has visited other heritage attractions in Alberta, both Salma and Sameer have come away having learned something new.

“Just based on what we know generally, it’s interesting to see how things actually were. We’ve been to other places, and you get a certain impression about indigenous ways of living,” Salma says. “I found it interesting to see how similar the Métis and settler cultures were. You are probably thinking tipis versus seeing actual homesteads.”

Check out this Facebook Live video about Metis Crossing

Another big takeaway for the family is the significance of the Victoria Settlement, on which Métis Crossing sits. Perched on the banks of the North Saskatchewan River about 100 kilometres downriver from Edmonton, the settlement was strategically situated for fur trading expeditions.

“I would never have known about this place, that it was such a major fort between Edmonton and Winnipeg,” Salma adds. “When you think about them going down the river, they had to have places to stop, and where they stopped is where people lived.”

In today’s developed world, it’s easy to overlook the significance of the river in shaping culture and civilization in the pre-modern era. Before railways, highways and modern conveniences, rivers were life-giving hubs of activity. The Métis people lived off this land and venerated its bounty.

Looking out on the settlement, with its flourishing gardens and log-built homesteads backing onto the flowing waters of the North Saskatchewan, one can begin to get a sense of that connection and what it meant to the Métis people, and what lessons we might take from that. 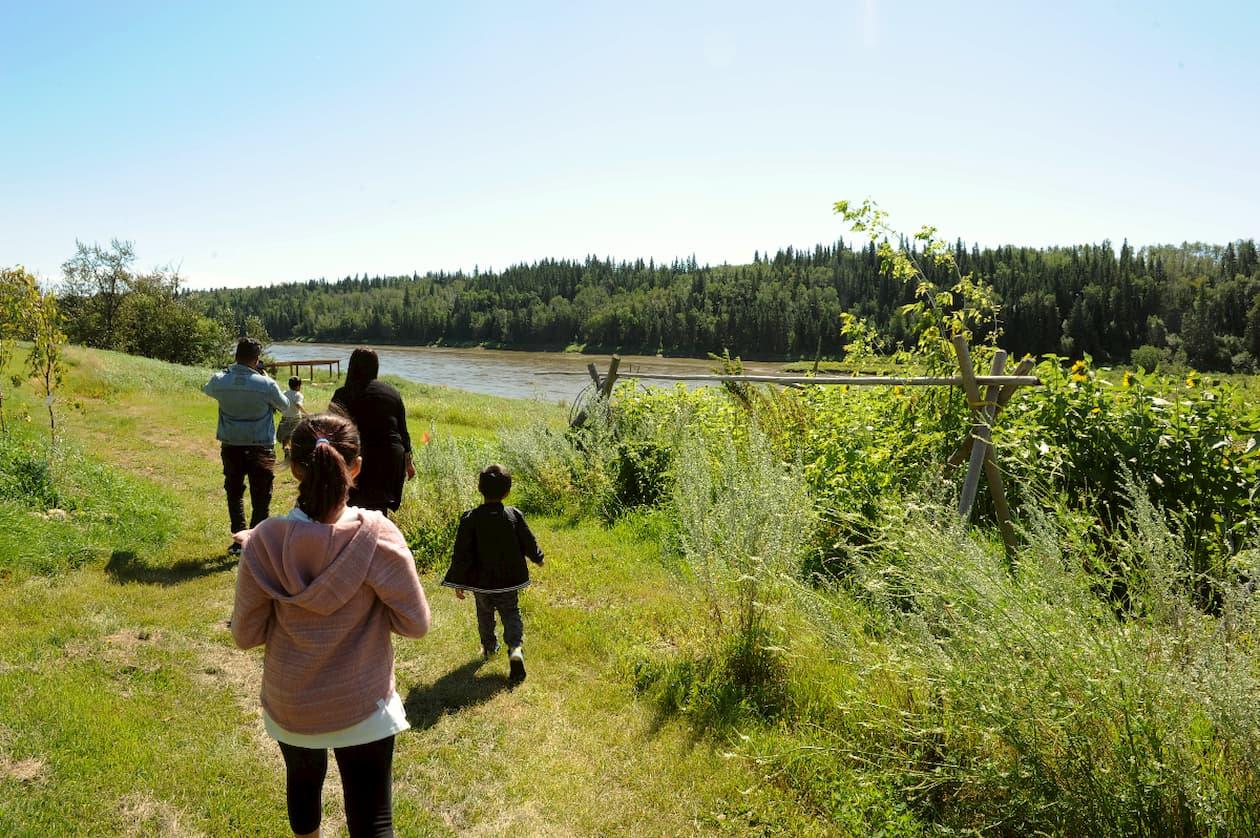 #MetisCrossing; Meet at the River to be Transformed

Uncover the opportunity to transform when you meet at the river and make your way to Metis Crossing. Book in for their Meet the Metis Experience today.

Share what you find when you #TakeItToTheLake this summer, using the hashtag and you might be featured on ZenSeekers and/or our partners' social media channels.