‘The way forward’: Crafting one canoe with many hands

‘The way forward’: Crafting one canoe with many hands

By Jim Barr and Hewkin of the Tla’amin First Nation.

Sunshine Coast, B.C. – The project’s premise was simple: one tree equals one sea-worthy canoe built by many hands, some more experienced than others.

Meet John Dominic, a Grade 8 student at Brooks Secondary School along B.C.’s Sunshine Coast on the traditional territories of the Tla’amin First Nation. During 2017, Dominic – his Indigenous name is Hewkin – had the opportunity to be part of the Hehewsin Canoe Project.

The Heheswin initiative is a celebration of First Nations experiences shared with the non-Indigenous community, a powerful force of positive change. The finished product, a 26 foot 11-person canoe, was built with pride that included the hands of Hewkin, his classmates and a whole lot of others. The canoe made its maiden voyage on Nov. 18, 2017, from Willingdon beach, the 40 day carving site.

Hehewshin – The Way Forward is a featured film at the 2019 Powell River Film Festival. Learn more.

The Hehewsin (translation, “the way forward”) project symbolically turns 5,000 years of local knowledge into a bridge for reconciliation. It embodies the idea that Canadians need to learn more about our First Nation’s brothers and sisters, recognize the injustices of the past, and do what we can to learn to truly respect, honour and celebrate the culture and people that has lived and thrived on this coast for millennia. Hehewsin is just one important part of the much larger picture needed to educate all Canadians about reconciliation and as you will learn from Hewkin’s comments below, a game changer.

To get a better idea of the Hehewsin project, watch this video from the C3 Icebreaker (Coast to Coast to Coast for Canada’s 150th) to see why the C3’s stop on the Sunshine Coast was one of the most powerful days during the 150-day odyssey:

Here are some of Hewkin’s thoughts about his experience with the Hehewsin project. 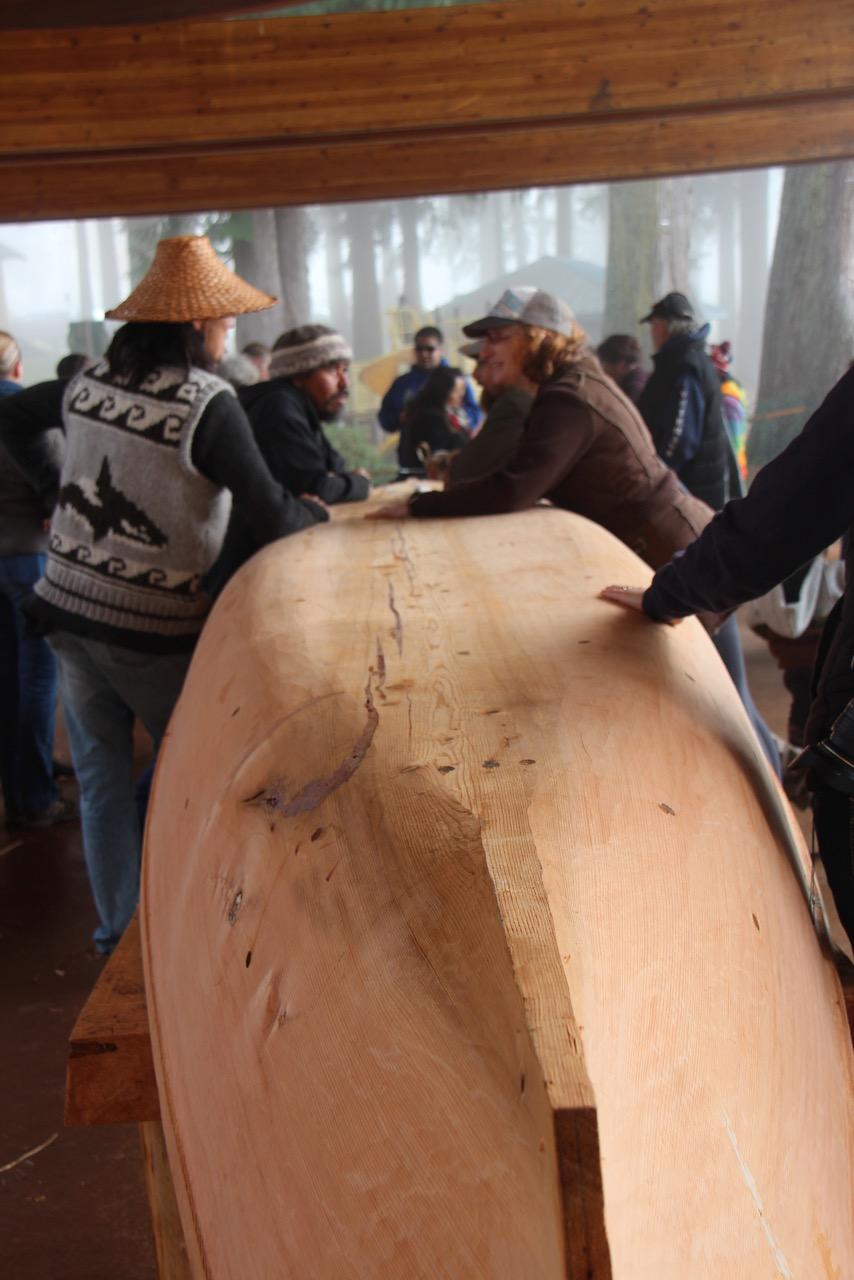 ZenSeekers (ZS): What was the most surprising thing about working on the canoe?

Hewkin: Joe, the lead carver said that if you have fear then you only learn half of what you are supposed to, but if you have no fear then you can learn anything. If you are too careful, then you won’t get anything done. If you are not careful at all, then your work will be messy. You have to be right in the middle of both: careful, but not too careful. As long as you don’t fear your tools or who you are working with, it will be just fine. I was scared at first, but after a while, I wasn’t. I had to trust myself.

ZS: What did you know about Indigenous ways before the project?

Hewkin: There are rules to be obeyed while you are with all other people on earth. Respect is our first teaching, not just to respect your family, but even your enemies. If you disrespect someone, your hate is like disrespecting yourself. Secondly, never just take all of everything – only take what you need. Don’t fill the canoe with fish or clams. Always make sure there is still more for the future. Always respect all of nature and what it has to give to us. 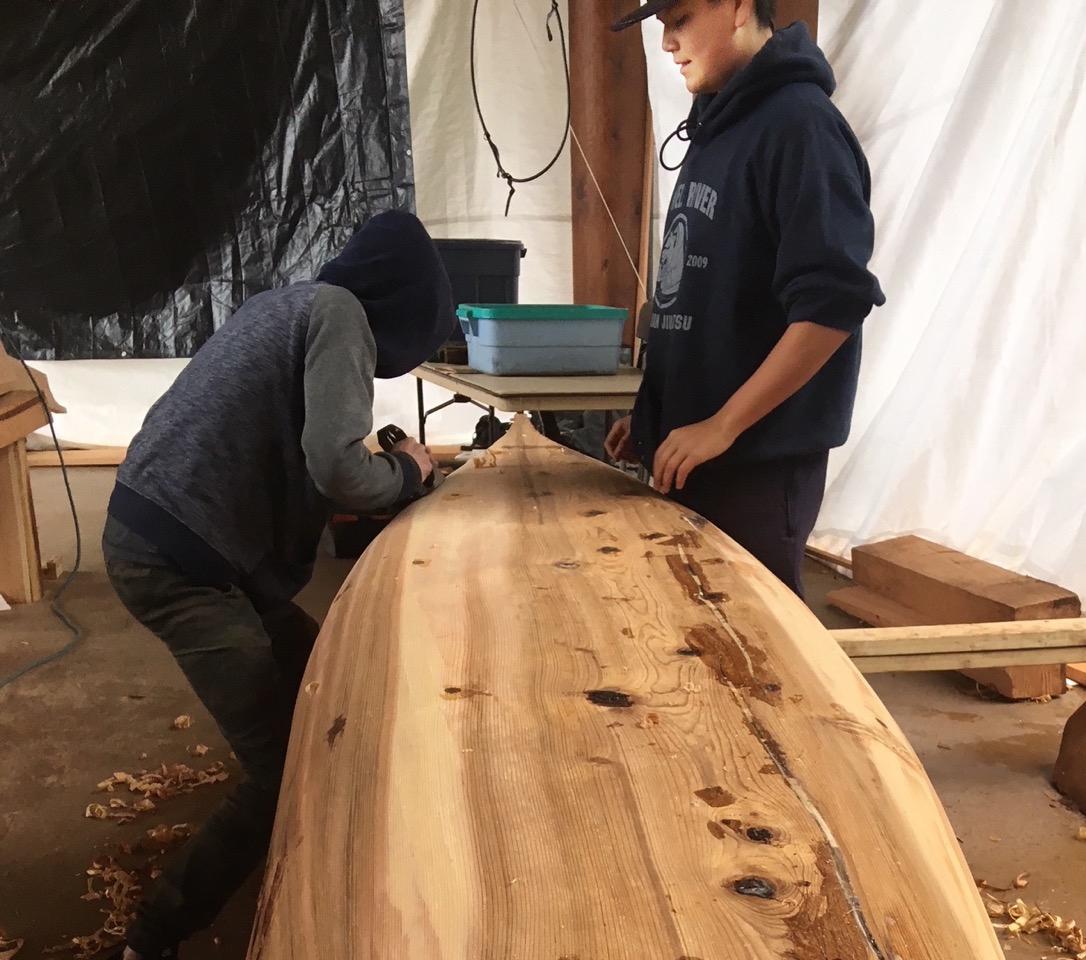 Hewkin: I worked a great deal with my friend, Matthew on the canoe. After we cut the log in half, Joe, Alvin, Ivan, Sherman and everybody who helped, used lots of different tools like the adze, elbow adze, hand saws, axes, pull planers, push planers. We used a chainsaw for the sides and inside of the canoe, carving slots out of the inside and outside. You start to get better at carving in about a week of work.

ZS: What was it like to see the canoe for the first time?

Hewkin: I was on the canoe for the first ride! I felt so warm-hearted to be on the canoe. I was no longer in the world, I was inside my culture. My soul was lifting out of my body. It was so amazing to see everybody there, non-Indigenous and Indigenous all together as one, not apart and it was hopeful. It was a moment of hope to have a canoe for the people that had to suffer from residential schools. It was great to hear all of the songs and see the people in attendance. 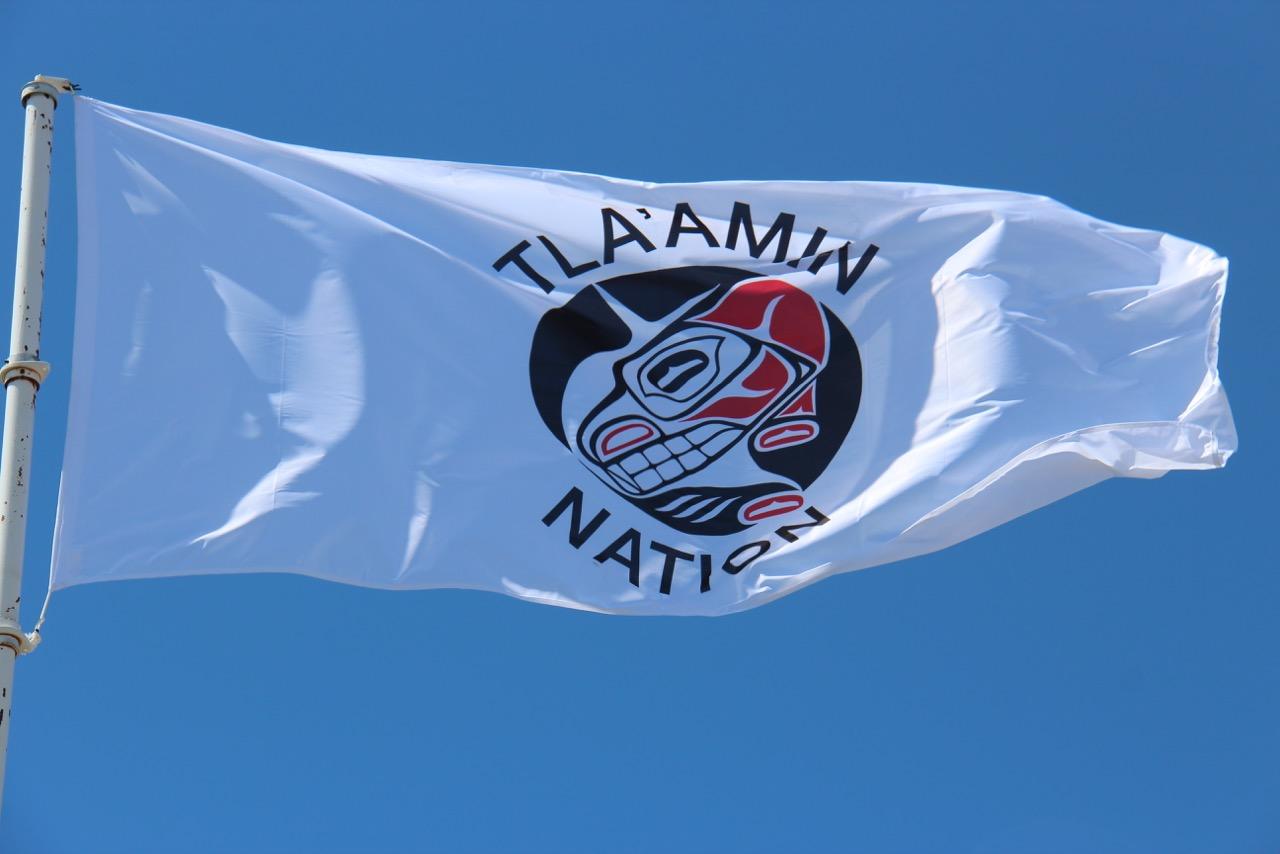 ZS: How did the project change you?

I really feel as if it has opened my eyes to the real world. Before that moment, I was in a fake life with no colours, but now I see everything for real. I love my culture when I am there. I feel like this moment has not just changed me, but given me a reason to go to school, learn about my culture and sing with friends and family. It makes me proud to be native. This has changed me for the better from now and forever.

Special thanks to Dominic’s mother and his teacher, Chris Bratseth at Brooks Secondary School for allowing ZenSeekers to tell this story and to Phil Russell, the founder of the Hehewsin movement.

How to get involved in ‘the way forward’

Travel this summer and support a First Nations business. There are many Indigenous businesses across B.C. and Canada and offer an immersive and memorable experience. Watch this video, showcasing B.C’s I’hos Tours experience – showcasing the traditional art of barbecue salmon.

Hehewshin – The Way Forward is a featured film at the 2019 Powell River Film Festival. Learn more.

There are several ways you can take the way forward yourself. Sign up for one of these courses that can teach you how to make a difference in your community.

The Indigenous Canada course. Offered through Coursera you learn on your own timeline and earn a certificate.

Let us know what you uncover and share your story with #ZenSeekers.