Gear up for winter fun in Hinton

One of delightful side-effects of living in a place where the outdoor activities are endless, is that you end up with a garage full of gear – Nordic, downhill and backcountry skis, bikes, fishing gear, snowshoes and all the sundry sporty stuff needed to take advantage of what’s on your doorstep.

Mark Tessier and Suzanne Stevenson’s garage reflects exactly how they roll recreationally. It’s what they love about living in Hinton, which initially they came for because of their jobs. Mark, a conservation officer with the province of Alberta, originally from Ontario, has been living in Hinton since 2015. Stevenson, an environmental consultant, moved from Edmonton in 2018.

And, though it was their jobs that brought them to Hinton, Mark, 39, says the side-benefits trump everything. “The ability for recreation in the area is fantastic. It’s surrounded by vast amounts of Crown land, gorgeous lakes and it’s close to Jasper but without the busy-ness,” says Tessier.

Most days after work you’ll find them cross-country skiing at William A. Switzer Provincial Park, which has more than 35 kms of expertly groomed trails for both skate and classic skiing, and fat biking thanks to the Hinton Nordic Centre. The views are pretty spectacular from the roomy and rustic warming lodge equipped with tables, benches and a wood-burning stove. The facilities are pro enough to have hosted national and international ski events and it has a robust youth program for Jackrabbit, Biathlon programs.

Plan your trip for winter adventures in Hinton

William A. Switzer Provincial Park is a beautiful spot for cross-country skiing, day or night.

When they are not backcountry or cross-country skiing, the couple will borrow a couple of fat bikes and hit the trails, or their other favourite activity, backcountry skiing. “There are so many things just out your door – mountain biking trails, hiking, trails at Switzer…snowshoeing, hunting, fishing…all right at your fingertips.”

Stevenson, 27, says Hinton has become a magnet for a lot of young people in their 20s and 30s.

“We also love the people here; there are a lot of young people. It’s affordable, Stevenson says. And another bonus? “You can see the mountains and afford your house.”

It may be the nature of their jobs working out in the field, but they regularly see moose, elk, deer, the occasional lynx and bald and golden eagles. Both says they see “cat” (aka cougar or lynx) tracks often when they are cross-country skiing.

Get in on these #ABWays2Winter incentives and start exploring Hinton

And they never get tired of the stunning views, like the one from Athabasca Lookout at Switzer.

“It’s only 700 metres, but and you look out over the Brule mountains, you see the foothills and the Rockies; it’s green rolling hills rolling into Rockies and Brule Lake. It’s fantastic!” says Tessier.

Stevenson suggests that it would be a beautiful spot for a marriage proposal, a hint perhaps to her partner. Or at a bonfire, during the community’s Lantern Festival, part of Hinton’s Winter Magic Festival which happens every February. It’s an event that Stevenson and Mark have enjoyed in the past. The town helps groups put on special winter events “to make winter more bearable,” says Mark. There are cross-country ski and fat bike races, and the kids get involved making paper lanterns to add to the glow of the festivities.

Like the rest of the community, they’re hopeful the event will happen in 2022.

When Suzanne wants to go for a spin on a fat bike, she just asks a friend if she can borrow a bike.

Meanwhile, they’ll continue loving their winter life in Hinton and making the most of what’s out their backdoor. That includes a number of spots they like to relax after a day playing outside.

A few of their favourite spots for food and beverages are Canadian SteakOut for their delicious burgers, The Old Grind for local coffee and the “best cinnamon buns I’ve ever had,” says Stevenson. Though other people love the cinnamon buns at Opa’s BakeShop where they also serve great lunches, she says. When they’re in the mood for Mexican, they had to another popular spot Rojo.

Stevenson and Mark believe Hinton is the best place to hang their toques for the time being, because after all, its all about the best of both worlds for them. “It has good balance.”

Start exploring Hinton with these packages and incentives

Check out these links to help you plan your visit to Hinton. 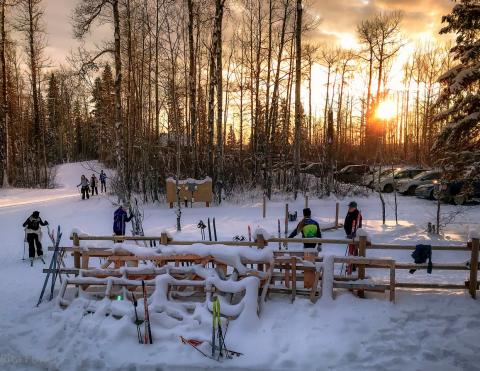 We can’t count the number of activities you can get up to in the west central region of Alberta this... 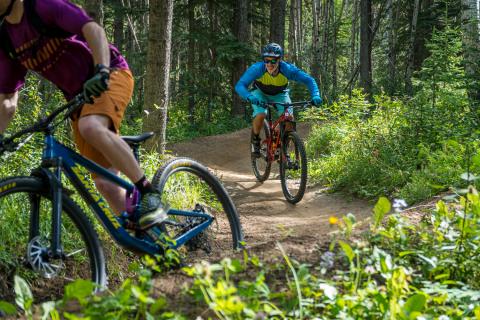 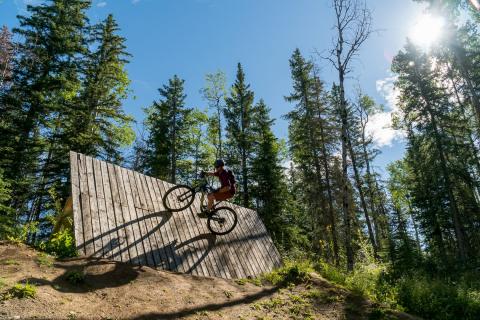 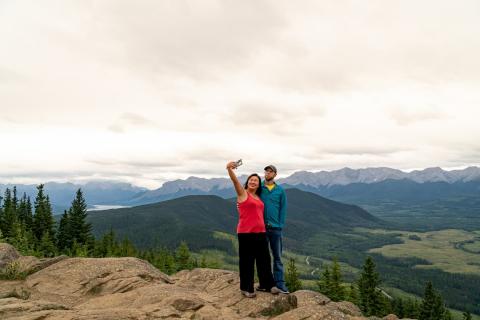