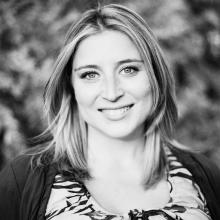 Rebecca built her first website in 1997 and she has been blogging about life in BC since 2004 on Miss604.com, which has since become BC's most award-winning blog. In 2010, Rebecca literally wrote the book on Blogging to Drive Business, and she has been named one of BC's Top 100 Women of Influence by the Vancouver Sun. In 2016, she won Variety International's media award and she welcomes an audience of 80,000 to her blog and social media channels each day.