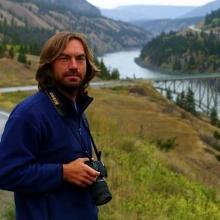 Jeremy Williams, producer, director, camera, and editor at River Voices Productions has always been passionate about nature. Since picking up a camera in 1994, he has been photographing the beauty of the world and has been lucky enough to earn a living doing so for the last 15 years.

In 1999, he bought his first video camera and began producing films. Since then, he has produced over 100 short films and documentaries on environmental, cultural and political issues.

His work has been broadcast on CNN, CBC, Vision TV, and Freespeech TV. His films have been screened in Film Festivals in Canada and the USA. His photography has been published in many books, magazines, and newspapers including Explore, The New York Times and the Vancouver Sun.